skip to main | skip to sidebar

The Ballad of Mr Hands and Other Yarns 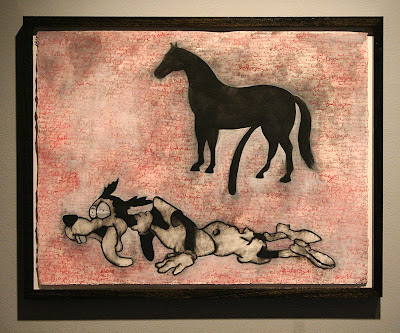 Telling a great story (or spinning a great yarn) can be tricky. Some of the best tales come to us filtered through layers of exaggeration, half-truths, and pure delusion. The internal affects of memory and time can mutate one experience into something completely different. There is no real way to know just how big the fish Uncle Steve caught really was. One of my main objectives in this body of artwork is to present stories, some from firsthand knowledge and others from outside sources, in a way that seems innocent on the surface but reveals something darker upon further examination. I collect ideas from personal experiences, as well as mass media sources- comic books, viral video, television, and advertising - then develop cartoon characters that represent the people from these stories. The characters in my paintings are mutations of their former identities. Some originate from humorous anecdotes, but many are a reaction to our culture’s obsession with decadence and the way people will knowingly sacrifice virtue for personal gain. The presence of tentacles as arms and the lack of a human gaze in their “zombie” eyes signal a loss of genuine humanity and a mutation into something sub-human. Each character represents a different story and emotion, but many of the paintings deal with situations of anger, aggression, bullying, and subjugation.
Mr. Hands was a man who got fucked to death by a horse. This statement, by itself, forces a brutal image, but when taken out of a realistic context and made into a cartoon image, it becomes less offensive, easier to tolerate. This is what I try to accomplish within the work. When I saw the “Mr. Hands” video on the internet, I could easily say that it changed me. I had seen my fair share of sick videos on the internet, but I found this one particularly disturbing. It made me feel really dirty. I knew right away that I would do a piece or two in response to Mr. Hands’ horrifying demise. I needed to work it out of my mind, and I have found that time spent in the studio fulfills that for me. If I portray the characters in that “mini-drama” as cartoons, it allows me to cope with the situation better because I am not hung up on the reality of it. 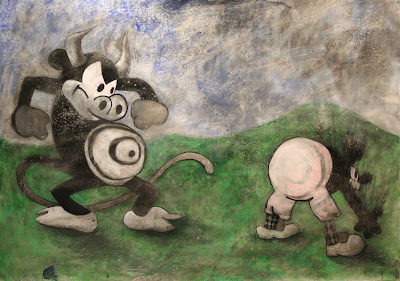 The characters that are developed in this body of work are heavily influenced by early animation from studios such as Fleischer, Van Beuren, Disney, and MGM from the early part of the 20th century. Some of the cartoons I draw from are Felix the Cat, Popeye, Tom and Jerry, Cubby the Bear, and Bosko. These cartoons are appealing because if the storylines are read literally, they are actually very unsettling. Racism, sexism, violence, vice, and death are rampant in these cartoons, but when portrayed by cartoon characters, they seem less offensive. Layers of political incorrect-ness are accompanied by jaunty tunes and silly dances. You can find DVD compilations of these cartoons for sale at Wal-Mart, often for around a buck. I own many of these compilations and find my research material on them. As I watch these old cartoons, I look for scenes that grab my attention and pull images from them.
My method of selecting imagery is based on the expression or tension in the characters in the cartoon still. If I am working on a painting where I would like one of my characters to be a bully, I will go through these old cartoons and find scenes that deal with a one-sided conflict, for example, a man beating a dog or a huge bird looming over a quivering worm. The actions in the paintings are often a physical representation of internalized conflict and repressed anger. The expressiveness of the creatures in the painting is a major thematic component to this body of work. I admire when you can convey something funny or something kind of creepy through posture, gesture or body language. I am also really interested in the space between an action and a reaction. That is why I usually deal with two characters placed in a way that leads the viewer to believe that something important is going to happen. I like when I am not sure whether somebody’s ass is going to get kicked, or somebody’s ass has already been kicked. What’s going on? I like to have that openness in the work, where I have put these individuals into various situations, and I know specifically what I am referencing, but I do not want to make that the focal point or nail it down. When I manipulate the posture of a character or the expression on his face, it points the viewer in a certain direction. From there, the viewer can imagine his or her own stories by putting together the visual cues that I have provided for them. 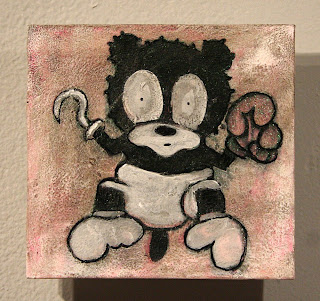 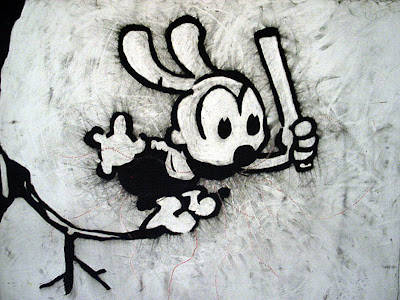 Hello, my name is Evan Dent. My artwork is mainly drawing and painting, but I try to keep my hands busy all around. I am currently living in Las Vegas, Nevada, and will soon be moving all the way to Maine. I'll be posting images of my artwork soon. Please feel free to drop me a line if you have ant questions or comments.
Posted by Evan Dent at 2:27 AM No comments:

Welcome to my page!

Please check the archive below for images of my artwork and other random goodies.

Also, If you like what you see, subscribe to my posts and you will get updates when I add something new!